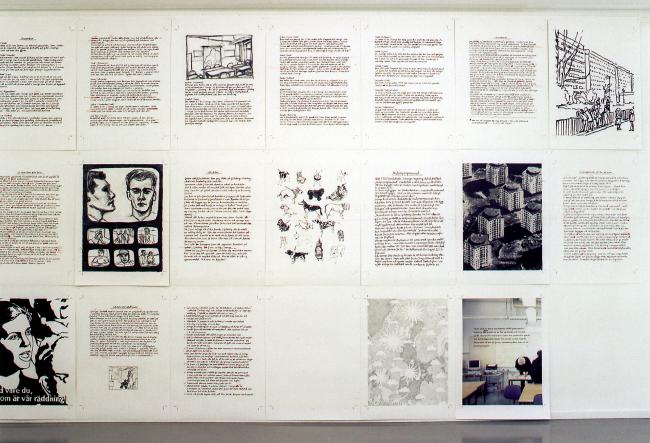 During my language studies I made notes, wrote texts, collected a lot of material. This led to the idea of making a “Swedish language book” from a student’s perspective. I shared with the other students in my language class, who came mainly from outside Europe, the fact of being from outside of Sweden. Special bonds where quickly established within the group. Beside learning a new language and getting to know another country I could take an inside perspective on lives of non-European immigrants in Sweden with very different backgrounds and future prospects.

The result is a huge book dummy. I use the “book” as media to store and express my experiences of learning a new language and of being a stranger in another country. And of course language “books” are important tools for the learning of a foreign language.

The book consists of 12 short chapters. Some are based on material from my SFI language classes - relating to my student colleagues and the lessons. Others relate to traces I followed up during the process of learning the language and living in a foreign country. Normally these traces disappear when one gets to know the language and settles down in the new place. I tried to archive them. Many of these traces overlap with SFI inspired subjects. Like in a language book I developed different chapters each referring to a specific theme. Except of the first they have two pages. One is a handwritten text in Swedish written by me and visibly corrected by one of my teachers. The other page consists of different kinds of images - realized as drawings or collages.